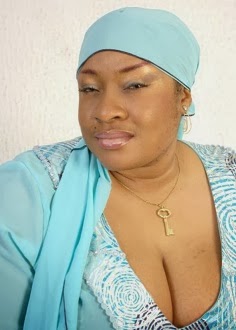 Barely four months after debunking the reports of her romantic alliances with Kayode Salako, describing it as “baseless rumour” and a “disservice from the Nigerian journalists,” busty crossover actress, Foluke Daramola on February 15, 2013, tied the nuptial knot with Salako at No.2, Gbeleyi Avenue, by Femifoam Oyemekun, College Road, Ifako-Ijaiye, Lagos.
In her earlier interview with Entertainment Express, the actress had denied having any romantic affair with Salako. Her words: “I work with this person they are talking about. We work together at Change Agents Network. If any journalist has caught me and Kayode Salako in an uncompromising situation and wrote the story, I wouldn’t need to be told that he has done an investigative story.
“To just see me and him working together and conclude that there is something intimate is a baseless accusation. How can you tell me that I’m romantically involved with somebody I work with because his wife left? Does that make any sense?” she fumed during the interview.
Their wedding did not only put an end to her many months of lies and denials, but also made her a subject of ridicule, for continuously lying to her fans, the media, and the entire public. In March 2012, reports of marital turbulence centred on the family of crossover actress, Doris Simeon when her celebrated film maker husband, Daniel Ademinokan allegedly trod the path of infidelity with another top actress, thereby putting the couple’s three-year marriage under tension.
The story made the cover of various newspapers and magazines and equally trended heavily online.
In reaction to the story, Simeon debunked the rumoured crack in her marriage, insisting it was a figment of the peddlers’ imagination, a distraction and a product of idle minds.
Speaking with Entertainment Express via telephone, the award-winning English and Yoruba actressavowed: “It is all lies and baseless rumour; it is far from the truth,” she maintained.
Today, Simeon has buried her head in shame, not only because the marriage irretrievably nosedived, but for initially lying and deceiving both the media and her numerous fans about the true state of her marriage.
The thespian who first hit fame with Papa Ajasco TV comedy series, is allegedly accusing Stella Damasus as the cause of her marital hiccups.

Share
Previous HIV SYMPTOMS TO WATCH OUT FOR IN WOMEN
Next 5 REASONS WHY YOUR VAG!NA ITCHES + REMEDY