FOR REAL? Beating Children Can Affect Their Mental Health [MUST READ] 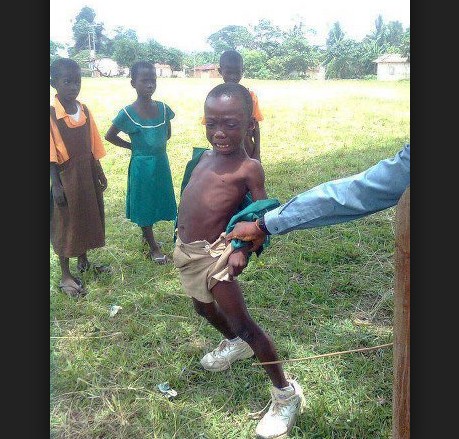 by Bukola Adebayo
Agreed that a verse of the Bible says, “Spare the rod and spoil the child”. And it will be wrong to disobey such instruction. However, the Holy Book does not say you should use the rod to harm the child.

Many parents, caregivers and guardians use the rod to harm children in an attempt to ‘discipline’ them. Such incidents bring up the moral and logical question on the role of the rod in parenting.

Science may have provided some insights and answers to the puzzle. After collecting and evaluating the results of a 50-year-old study, researchers announced the troubling and yet enlightening result of spanking in kids, either for correctional or punitive purposes.

The study, published in this month’s Journal of Family Psychology, reveals that the more children are spanked, the more likely they are to defy their parents; experience anti-social behaviour; express aggression, suffer mental health problems and cognitive difficulties.

The scientists evaluated the research which involved over 160,000 children across the globe.

The lead researcher and associate professor of human development and family sciences at the University of Texas at Austin, Elizabeth Gershoff, described the result as the most accurate and evidence-based analysis that has showed the effects of spanking alone in many years.

Gershoff says, “Our analysis found that spanking was associated with unintended detrimental outcomes and was not associated with more immediate or long-term compliance, which are parents’ intended outcomes when they discipline their children.”

Scholar and co-author Andrew Grogan-Kaylor links spanking with 13 of the 17 negative outcomes in children and adults.

“The upshot of the study is that spanking increases the likelihood of a wide variety of undesired outcomes in children. Spanking thus does the opposite of what parents usually want it to do,” Grogan-Kaylor says.

Gershoff and Grogan-Kaylor also tested for the long-term effect on adults who were spanked as children.

The study reveals that the more they were spanked in childhood, the more likely they were to exhibit anti-social behaviour and experience mental health problems.

The analysis says that adults who were spanked in their teens are likely to support physical punishment for their kids.

The scientists note that one should worry on the import of this attitude towards physical punishment being passed off as the norm through generations.

Both spanking and physical abuse were associated with the same detrimental child outcomes in the same direction.

“We as a society think of spanking and physical abuse as distinct behaviours,” she says. “Yet our research shows that spanking is linked with the same negative child outcomes as abuse, just to a slightly lesser degree.”

She says, “We hope that our study can help to educate parents about the potential harms of spanking and prompt them to try positive and non-punitive forms of discipline.”

Share
Previous Dirty Act Every Lady Should Avoid
Next 18 English Words That Hilariously Mean Something Else In Other Language.